The name of Štiřín, today a part of the village of Kamenice, is first mentioned in 1395 in connection with Chval of Štiřín. Throughout the years it had various forms, including Stiřín, Stiřím or Štiřím.

At the beginning of the 15th century a fort was built at the site of today’s chateau. Here, King Maxmilian stayed overnight on his first journey to Prague as the sovereign in 1562. After the Thirty Years War the fort was rebuilt as a baroque chateau with a park. From the original fortress, the three vaulted rooms on the ground floor were preserved.

In 1750, the older structure was extensively rebuilt by Count Salm-Reiferscheid as a buoyant two-storey late baroque residence with a ridge-tile mansard roof and eight attic windows with segment ledges. Its central wing opens through a massive stair salient into a courtyard enclosed by both side wings. An oblong chapel, as high as the main building, adjoins the north-western wing.

Look for a statue of St. John of Nepomuk of 1764 situated on the left side of the sunken garden in a small niche.

In 1822, the Chateau and the entire estate were acquired by Duke Rohan. Nine years later, they were sold to Count Nostic-Rheinek, who carried out extensive building modifications. In 1870, Štiřín, the estate and the nearby village of Popovice were purchased by Baron František Ringhoffer, a coppersmith and tinker of Kamenice raised to the peerage, whose family had been living in Bohemia since the mid-18th century. The Ringhoffers owned the Chateau until 1945.

The last building modifications concerning above all the north and central wings were carried out in 1901 – 1910 by the architect J. Stibral. The Chateau’s roof was covered by slate and electrical lights were introduced. In addition, the original passage through the Chateau to the park was turned into an interconnecting corridor. 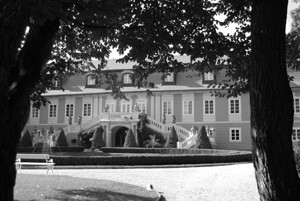 In 1945, the Chateau was nationalised.

From 1945 to 1947, Štiřín, together with Kamenice, Lojovice and Olešovice, was involved in the so-called “Project Chateaux” organised by Christian humanist and pacifist Přemysl Pittr. Its objective was to save children of all nationalities returning from German concentration and Czech detention camps. This humanistic project supported by many local residents is commemorated by a tablet placed on the Chateau. It was unveiled in 1995 on the occasion of the world cultural anniversary of UNESCO.

In the years to follow the Chateau was used by various organisations. It was largely neglected and devastated.

In the mid-1950s it was handed over to the Ministry of Education and used as a trade union training and holiday centre.

In the period of 1985 to 1993 the entire estate underwent an extensive restoration whose objective was to turn it into a hotel. It needs to be said that all work was carried out with extreme sensitivity and professionalism.

In 1991, Štiřín was handed over to the Ministry of Foreign Affairs.

The most historically valuable and best preserved parts of the Chateau’s interior are located on the first floor. They are now used as conference rooms and lounges for our guests (original fireplace, inlaid wall panelling and doors). Suk’s Lounge has rich ornamental stucco ceilings and doors with rococo hood moulds.